Monika Le Fay: Not long ago I published an exclusive interview with Andrej Babiš Jr.

Not long ago I published an exclusive interview with Andrej Babiš Jr.:

The guy who – not too long ago – piloted a Boeing 737, speaks English, French and several other languages. He can fly, he can do programming, he can do a handstand. However the country where his father controls nearly all public media, it’s a fairly hard job to stand up against the mainstream.

Psychiatrist Cyril Höschl, notably, is frequently cited by the media as an expert on Andrej Babiš Jr.’s mental health, throughout the case, from when he was forced off the D1 motorway by police and taken to a distant hospital in Havlíčkův Brod, through the decision of an ex-communist judge to commit him to psychiatric care (“he was a danger to himself or to others around him”), to his being given an injection and subsequently waking up in the National Mental Health Care Institute in Klecany. Dr. Höschl is someone who has never examined Andrej Babiš Jr., but claims that he recognises schizophrenia and depression at a glance. Is this some kind of absurd humour? Maybe, but in this case a life is at stake – the life and reputation of a young man who has done nothing wrong.

Since I wrote about Dr. Höschl in the StB (State Security Police under the former communist regime), [ readers regularly contact me with other experiences with Cyril Höschl and his institute. Many of them are his colleagues from the same field, who understandably do not want to appear in public. Because I think I have already written enough about this, and there are plenty of other topics which interest me more, I have not responded. But now I feel I have to make an exception, because I have received information which once again confirms the unfavourable way that this media-friendly psychiatrist has been involved in the abduction of Andrej Babiš Jr. to Crimea, and how willing he is to breach medical ethics just for the sake of his own ego. 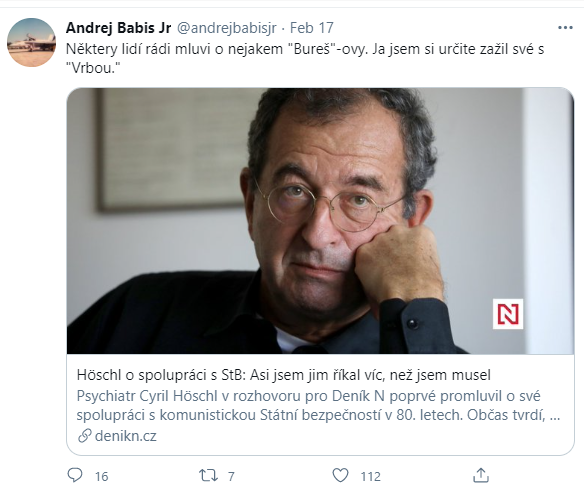 Translation: Andrej Babiš Jr. @andrejbabisjr Feb 17: “Some people like to talk about a ‘Bureš’ (code name of Prime Minister Andrej Babiš Sr. in StB files). I have had my own experiences with Mr. Vrba (Dr.  Höschl’s code name)”.

Höschl on cooperating with the StB: “I think I said more than I had to” In an interview with Deník N newspaper, psychiatrist Cyril Höschl speaks for the first time about his cooperation with the communist State Security Police in the eighties. – denikn.cz

Cyril Höschl has a profile on Facebook. He likes being photographed, he likes sharing his interests (“Art – the path to the soul”). The peak of his cynicism was when, not long ago, he shared a link to an interview with Andrej Babiš Jr., apparently to support his claim that he never had any doubts that Babiš Jr. had schizophrenia (“I never mentioned it but I don’t have any doubts that this is the case”, he said in an interview with Jiří Kubík at Seznam Television. In an extraordinary discussion, which he then rapidly deleted, he says “…for example, I can confirm that Dr. Protopopová never wrote an expert report on Andrej Babiš Jr. As far as I know, there is still no expert report on him in existence.” 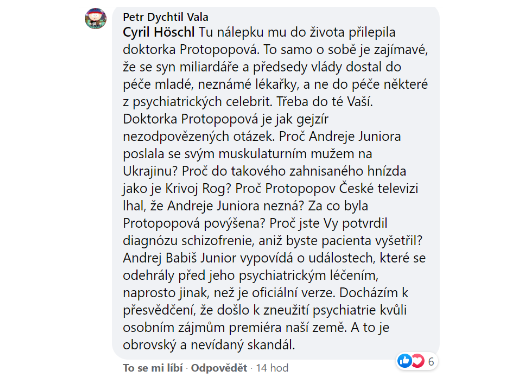 Translation: Petr Dychtil Vala: @Cyril Höschl That label was attached to his life by Dr. Protopopová. It is interesting in itself that the son of the billionaire Prime Minister was put in the care of a little-known young doctor rather than one of the celebrities of psychiatry. Such as yourself. Dr. Protopopová is like a fountain of unanswered questions. Why did she send Andrej Jr. to Ukraine with her muscly husband? Why to a dump like Krivoj Rog? Why did Mr. Protopopov lie to Czech Television that he didn’t know Andrej Jr.? Why was Dr. Protopopová promoted? Why did you confirm the diagnosis of schizophrenia without examining the patient? Andrej Babiš Jr.’s account of the events that preceded his psychiatric treatment is quite different from the official version. I am becoming convinced that this was an abuse of psychiatry to serve the personal interests of the Prime Minister of our country. And that is a huge, unprecedented scandal.

Translation: Cyril Höschl: @Petr Dychtil Vala Your questions are excellent and I wonder about them too. As regards Andrej Babiš Jr.’s illness, I refer you to the Swiss psychiatrists, but time has passed (by the way, I did examine the patient).

Translation: Cyril Höschl: And how and why did he get this label in the excellent Swiss hospital that you mention? And why is he being given medication there? He said that himself, I’m not putting words in his mouth, just referring to a genuine video interview.

(Never mind that, even if it was true, what gives him the right to discuss it?) Does it mean that if somebody is a schizophrenic then he is lying? Surely the role of psychiatry should be to try to destigmatise the patent, not the opposite.

I may not have studied psychiatry, but I know there is such a thing as gaslighting – that highly manipulative and narcissistic people can sometimes drive more sensitive individuals to schizophrenic-like behaviour.

From a hypothetical point of view, if somebody does not have schizophrenia and somebody else keeps telling them via the media that they do, what effect does that have on them?

Let’s say that their defence is that they feel mentally well and they have confirmation from Switzerland, where they were given the American Psychiatric Association’s standard tests, which did not show any mental illness.

What does the gaslighter do in that case? They write in public: “And how and why did he get this label in the excellent Swiss hospital that you mention? And why is he being given medication there? I’m not putting words in his mouth…”

Furthermore, on Facebook the director of the National Mental Health Care Institute commented on Dr. Dita Protopopová, saying that he “immediately dismissed her”, whereas Höschl’s spokesman previously told the media that she had left on her own initiative and there had been no breach of ethics.

Translation: Cyril Höschl: @Lenka Dubová Please don’t put words into my mouth. I didn’t say she was dismissed, just that I had terminated her employment. It was by mutual agreement. Is that enough? Otherwise, if you want, you can come and see me and I will gladly tell you everything I know about it, because this disinformation is really annoying me. Although I can’t tell you anything from the documentation or anything that is subject to medical confidentiality, I can for example tell you that Dr. Protopopová never wrote an expert report on Andrej Babiš Jr. As far as I know, there is still no expert report on him in existence. She only wrote him a sick note once for a summons because he was not feeling well. It’s like writing a sick note for a child saying that they can’t go to school that day. But that is a question of momentary indisposition, it’s not a report, just that he can’t appear one week and can the next. It does not say anything about his overall competence. And hundreds of these lies and pieces of nonsense are being spread around the web and nobody corrects them, it’s hardly worth the trouble. So if you are really interested in the truth, I can be one piece in the puzzle for you.

The whole discussion on Cyril Höschl’s Facebook wall is a blatant breach of medical confidentiality. It seems that in the eighties he got used to taking reports of an intimate nature on his patients to the State Security Police, so today it doesn’t even occur to him that spreading information in a public forum is simply unethical. As is mentioned in the discussion, he is just lucky that Andrej Babiš Jr. did not sue him.

At least Babiš Jr. is lucky enough not to have been in this world when Höschl taught about lobotomy as one of the options for treating psychiatric disorders. Today, then, he can freely go to a doctor in Geneva and own the results of tests done according to the American Psychiatric Association’s specification which imply that he does not have schizophrenia. In this country, however, it is not tests that decide whether you are well or ill, whether you are a schizophrenic, whether you are “on holiday” – it’s Cyril Höschl.